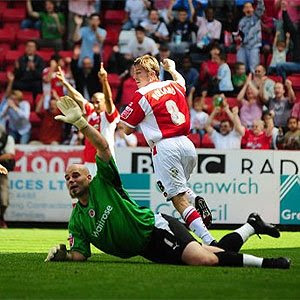 Yea, it really was a very happy birthday for me! A couple of beers beforehand, then into the stand for the match.
My first look at the class of 2008/9 - Bouazza, Hudson, Bailey - for the first time - and most of the others for a consecutive Championship season.
The Valley looked OK - nothing really new about it, and fuller than I thought it might be, apart from at the away end. There, Reading had only brought about 1,400 fans, and in my book that was going to throw Charlton's record of 20,000 plus crowds into doubt (in the end, a compromise figure of 20,020 was announced - hmmmm...).
Reading are amongst everyone's favourite's for promotion this season, so it was a relief to see Nicky Bailey bossing the midfield in the early stages of the match. Charlton were taking the game to the Royals, and after Bouazza had gone close, the first goal came when the same player returned a cross into the area and Holland forced home the keeper's parry after Varney's weak shot was deflected (above). Not the best goal to see as your first of the season, but very happy was this blogger anyway!
I was disappointed by Reading to tell the truth; they really did seem to have the 2007/8 Charlton disease, thinking that they could win games at a canter. Sure, James Harper is a good player, but Matt Holland was countering whatever he did. Sure, Stephen Hunt may be subject to a £4m offer from Sunderland, but playing him at left back, where Lloyd Sam kept him busy and on the back foot all day won't help his sales value. Leroy Lita was not in the picture, and other Premiership "names" just didn't perform. 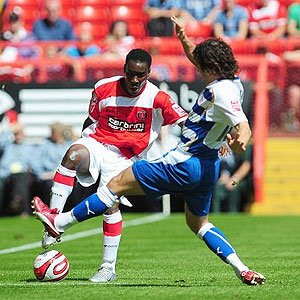 It was a surprise then when Reading won a penalty - Moutaouakil having been adjudged to have tripped Doyle. Luckily, the fouled player hit the bar, and the ball was scambled clear. The weak penalty decision wound up the crowd, and possibly contributed to Charlton winning their own penalty a few minutes later. Lloyd Sam gathered the ball on the right wing in midfield, and his forward ball down the line left Varney one-on-one with a defender. Varney's pace took him most of the way past the defender and into the area where he tumbled under a soft challenge. After a brief consultation with a linesman who hadn't flagged or indicated anything really, the penalty was awarded. Andy Gray thumped it home - 2-0.
As half-time approached, it was yet again one of those times when you just hoped for the whistle, save Charlton mess up and concede, but sadly the whistle was too late coming and Sonko pulled a goal back with a header after a corner was half-cleared.
At half time I must admit I had visions of Charlton losing 3-2 (always the worst thing when you have been 2-0 up...), and when the referee gave the Royals another penalty, I really did fear the worst! For the third time, it was a quite soft penalty decision; Fortune having been adjudged to have pushed a forward as Weaver punched clear. There is no way that either outfield player would have got a header on the ball without any contact so it was not the best received decision of the afternoon it should be said.
Could Charlton survive another penalty? Well, nearly. If the officials had rankled Charlton's fans by awarding two kicks to the visitors, then they did their best to really really upset the Addicks by disallowing Weaver's smothering save - the lino saying that Weaver was off his line when the kick was taken. It didn't look like it to me at the time, and many players and fans alike were a little incensed by this additional chance given to the away team. Finally the ref and lino seemed happy when the scores were level (Hunt finally hitting the net with the retaken kick), but the crowd howled.
Many times in the past, I've seen Addicks teams capitulate from similar positions, but this time, after Varney was sort-of pushed to the ground (but play was waved on...), he got up to head the resultant cross into the corner of the net to give the home team the lead again. A couple of minutes later, another right wing cross was volleyed in by Bouazza - it was Hameur Time!
Charlton survived to the finish - Reading hit the bar, and put a few shots wide or at Weaver, and Gray thumped the bar from a Bouazza cross, although that was given offside...then it was over. A fine win for Charlton, and a good game to watch for TV fans on Sky. Sixth place for the Addicks at the end of August is a decent start to the season me thinks!
The team played pretty well all around - Moutaouakil and Basey got well forward, but also put in plenty of tackles. Central defence had little trouble, and Holland and Bailey in midfield controlled that area for most of the game. Bouazza and Sam both did well out wide, and tracked back when necessary, and Varney and Gray up front put in lots of effort and both made it onto the scoresheet.
Linvoy Primus has been signed (well, it's been agreed that he will sign on Wednesday..), so that shores up the lack of central defence personnel, and all of a sudden, it's not looking too bad to be an Addick.
I know it's very early in the (long) season, but with the finances hoepfully set to be controlled by the sale of Zheng Zhi this week, the only way is now forward. We won't have to sell anyone come January (not that many of the team are actually worth much that would make a big difference sales wise!), and the team, with Pardew unable to change it much due to numbers, looking to be fairly consistent barring injuries for the next couple of months.
If that brings team spirit to add tot he honesty and workload that the team showed yesterday, then there is hope that the side can maintain a reasonable position in the league up until Xmas. And if that happens, the we will se if the board are prepared to take a chance and finance a push on towards the top of the table. Now that would make for a good birthday present!

Comments:
Glad you had a good Birthday certainly helped with one of the best Charlton displays I have seen for sometime